So with the recent hype around the Vendy Awards BigBite was curious to see what these top trendy carts in the Philadelphia area had to offer.

Before I continue, let’s note…Philly is a crazy cart city. The amount of culinary skills found in hot, tight, shoe-boxes on wheels – in about every neighborhood – is incredible. With so many available carts to choose from, I guess I understand not all food cart could have been chosen. I mean, I can suggest at least six good carts in West Philly alone that I like to throw my dough at.

I know that most of the carts were gourmet/trendy heavy, but I’d like to see some diversity in the carts chosen. There’s got to be a super esteemed around-the-way-jawn offering a $5 cheesesteak somewhere in this city that could have been considered.

Anywho. We decided to throw our two cents in on this cart craze. Recently we visited the vendy winner, Gigi and Big R’s. I’ve always heard good things about this cart, AND it’s in close proximity…so I had to try it.

A few associates and BigBite supporters and I went on a little lunch trip to the Vendy Awards winners’ food cart. I was so stoked to get my grease on in the early afternoon and had heard that they really piled it up on their orders. 2 fish sandwiches, and this beautiful (small) fried chicken platter later, here is what I have to say: 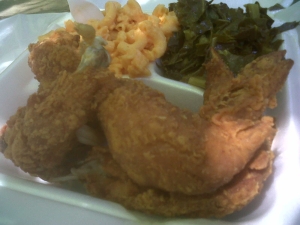 -Servings were generous. I mean I got enough for two meals and I certainly can put food away!! However, the size of my meal was about all that got me excited. I am not one to complain about service…but dang…Gigi must of had a bad day. The folks are not very nice at this spot, but I could get over that.

What really disappointed me was flavor. I got the fried chicken with greens and mac and cheese. It was, for lack of a better word…blah. Not a Wing King winner-type. The chicken was crispy (how I likes), but flavorless. The greens were a funny texture, and the m&c could’ve used a punch of salt. Sauces would’ve been a great addition to the chicken…but they didn’t offer any. At least hot sauce?? Really?? For comfort food. Really?? Nothing? Nada? REALLY?? *sigh*

As for the fish sandwiches….yea…samsies. Bland and yearning for sauce.

All in all, I wasnt impressed with this cart, which has me wondering what the winning dish was for the Vendy’s. I may try again. For the meantime I am just going to assume that I had a bad meal, because Gigi had a bad day.

Big Appetite. Big Competitions. Big Attitude...Big Bite. A blog about food, food battles, and how food rules everything around me. F.R.E.A.M.! END_OF_DOCUMENT_TOKEN_TO_BE_REPLACED
This entry was posted on Thursday, August 18th, 2011 at 6:27 pm and posted in Uncategorized. You can follow any responses to this entry through the RSS 2.0 feed.
« Champion’s Showcase: Lily, Tegan & Ali Wing King III
Introducing MISSION: INPASTABOWL… »